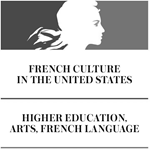 Today, under the leadership of Bénédicte de Montlaur, Cultural Counselor of the French Embassy and Permanent Representative of French Universities in the United States, the French Cultural Services provides a platform for exchange and innovation between French and American artists, intellectuals, educators, students, the tech community, and the general public. Based in New York City, Washington D.C., and eight other cities across the US including Chicago, the Cultural Services develops the cultural economy by focusing on six principal fields of action: the arts, literature, cinema, the digital sphere, French language and higher education.
1 TOURS 1 PLACES - RATING